Higher energy prices are hurting us all Click here.

Home » Be on Guard Against Carbon Monoxide Leaks

Be on Guard Against Carbon Monoxide Leaks 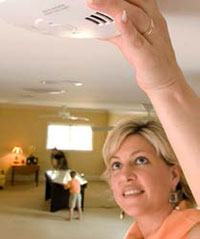 Most cases of carbon monoxide (CO) poisoning occur during the flu season, which typically begins in the fall. Because many CO poisoning symptoms mimic the flu—fatigue, dizziness, nausea—most people initially don’t recognize the danger of the situation.

That’s why it’s important to have carbon monoxide detectors in your home—especially in your bedrooms. If the detector sounds an alarm, ventilate the home with fresh air right away. If you feel dizzy or drowsy, leave the house immediately.

Identifying carbon monoxide leaks can sometimes be complex because there are various causes, including:

All of these situations could set off a CO detector, but conditions can change by the time a technician arrives, which makes a diagnosis difficult. Help us by sharing as much information as possible so the source of the problem can be identified correctly.