Home » Blog » Why Is Propane Considered A Green Fuel?

Why Is Propane Considered A Green Fuel? 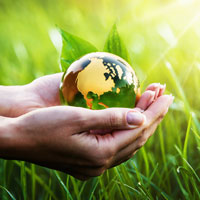 Did you know that propane is listed as an alternative fuel under the 1990 Clean Air Act and the 1992 National Energy Policy Act?

Because propane has such a low carbon content, it produces next to zero greenhouse gas emissions or air pollutants, making it a clean-burning energy source. It also has lower amounts of carbon dioxide and nitrous oxide than other petroleum fuel sources such as gasoline, diesel and heating oil.

And, unlike those other fuel sources, propane won’t damage plant life, soil, air, water or marine live if there’s a leak.

Propane also uses less energy in your North Carolina home. Using a propane water heater will give you hot water around 40 percent faster than an electric water heater.

Business and governments are turning to propane more and more for clean-burning equipment like forklifts and commercial mowers, and propane autogas for fleet vehicles like delivery vans and school buses.

And there’s a new way propane will be even more environmentally friendly: Renewable propane.

The promise of renewable propane

Propane is going to play a large part in that effort, as cleaner-burning fuels are a critical part of meeting that goal. Propane emits less than half the greenhouse gas emissions of electricity to produce the same amount of energy.

And that is just the beginning of the way propane will help North Carolina achieve those objectives!

The growing production of renewable propane is another big way North Carolina will reduce its greenhouse gas emissions. What is renewable propane? It’s a by-product of the renewable diesel process. Engineers are currently perfecting methods for producing propane from renewable resources such as plant oils, animal fats and biomass.

With the potential for millions of gallons of renewable propane being produced every year, and with that number to keep growing, renewable propane will create even lower greenhouse gas emissions while offering all of the benefits of traditional propane, including being reliable and affordable!

Parker Gas is excited about the cleaner and greener future renewable propane can bring to you, our communities, and the North Carolina environment we all cherish.

Find out more about how propane can help you save energy and reduce your carbon footprint. Become a Parker Gas customer today!